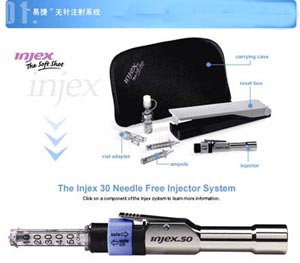 In the next few years, needleless syringe products will continue to decline, and there is little room for growth in the international market.

Syringes are the most commonly used medical devices in medical institutions. According to reports, the annual sales volume of disposable syringes in the international market is as high as 1.2 billion. However, the traditional syringe must be injected into the skin (or vein) by the needle to inject the liquid. This operation not only causes skin damage to the patient, but also has certain risks (such as accidental breakage of the needle during injection). The developed countries, led by developed countries, began developing needleheads in 1979, and advanced syringes such as the diffusion of drug solution into patients' skins with high-speed airflow.

After many years of development, the world's first needle-free syringe product, Medi-Ject, was launched in the United States in 1992 and approved for insulin injection. According to the manufacturer, the working principle of this product is to use ultrasound and high pressure to atomize the insulin solution to form an ultra-fine particle aerosol. Under high pressure, the insulin aerosol penetrates through the tiny pores on the skin and subcutaneously diffuses. Complete the injection process. Because Medi-Ject did not cause bleeding or other trauma to the patient during use, some famous US international consulting companies such as Frost & Sullivan predicted that new needleless syringe products would set off a storm in the syringe industry. Annual sales are expected to exceed one billion US dollars.

Inspired by the successful launch of new syringes such as Medi-Ject, US manufacturers have successively introduced new needleless syringes such as Vita-Ject and Activa. Some market economic analysts in the United States had boldly speculated that needleless syringe products will gradually replace traditional needle syringe products in the next 10 years. The reason is that needleless syringes have many advantages: 1. Will not cause cross-infection; 2 No pain when injected ( Painlessness of the patient does not cause skin bleeding, etc.; 3 can be used repeatedly.

So, what are the sales of needleless injectors in the international market? According to foreign media reports, since the launch of Medi-Ject, the world's first needleless injector, has been on the market for 20 years (for a short period of time), the overall sales of needleless syringes are not satisfactory. According to the CEO of Medi-Ject's production company, the cumulative sales volume of this product for 20 years is only 50,000, and it is evenly distributed to annual sales. However, it sells 2,500 cigarettes per year, which is less than the fraction of the production and sales volume of any disposable syringe company in foreign countries. The data that can better illustrate the problem: In 1995 (only three years after the needle-free injector came into the market), the total sales of needleless syringes in the world accounted for about 1.5% of the international insulin syringe market share. In 1997, needleless syringes accounted for only sales The 1% of the international insulin syringe market has shrunk to only account for less than 0.7% of the international insulin syringe market in 2010.

The price is the biggest weakness

First, the retail price of needleless syringes is too expensive. This is related to the huge investment invested by the manufacturer in the product development process. According to foreign media reports, Medi-Ject needle-free syringes were sold for as much as more than 1,200 US dollars each when they were put on the market. With the mass production of products and the increase in output, the price dropped to only 798 US dollars each, but in fact it is nothing more than Insulin syringes, where the sale price of each disposable syringe on the international market is only around $0.20 (the cheapest disposable syringe is only a few cents each), compared to needleless syringes as an insulin injection Equipment products are less cost-effective.

Second, at the end of the 1980s, western manufacturers led by NOVO Corporation took the lead in the development of a new type of medical device, the insulin pen, which combines a syringe and a drug solution. To avoid the patient must first refrigerated insulin injection, and then removed from the refrigerator and injection and other troubles. The listing of insulin pens took away the market share of needle-free injectors that had previously been high hopes.

Although the price of insulin pens was only in the range of 100 to 200 U.S. dollars at the beginning of the listing, the price of insulin pens plummeted with the continuous expansion of the production scale and the continuous participation of new insulin pen manufacturers. Only insulin pens are priced at only $12 or $20, and most people with diabetes can afford it. In addition, insulin pen manufacturers are constantly improving their products, such as the use of ultra-fine needles that cause minimal pain to patients, and insulin pens have quickly occupied the global market. Subsequent listings of "needleless syringes" were not successful, and it was difficult to compete with inexpensive insulin syringes such as insulin pens.

The third is the needle-free syringe "congenital deficiency." Its design plan now looks a bit dated. Since then, the new needleless syringes marketed, such as the J-TIP, have been designed as disposable syringes. It also draws on the new concept of â€œneedleless injectionâ€. The high-pressure gas used is very inexpensive carbon dioxide. The syringe also passes through high-speed airflow. Forcing the atomization of the insulin solution into the skin, and the biggest advantage is that the price is low, and the price is only about 2 US dollars each.

After the extremely low-priced J-TIP went on the market, sales volume expanded rapidly. According to foreign media reports, in 2010, J-TIP's total sales have exceeded 2.5 million (the vast majority of sales in the European market). Under the pressure of new products like J-TIP, the retail price of Medi-Ject, the earliest needleless syringe product developed and marketed, sharply dropped to less than US$600 each, but it is still nearly 300 times more expensive than J-TIP. The former has no possibility of further price cuts (we will cut prices again, and manufacturers can only close their doors).

According to foreign media reports, the United States Medi-Ject plans to further reduce its price to US$495 per unit, but it is still more than 200 times more expensive than J-TIP. According to a survey conducted by a market research company in the United States, 7 out of 10 people with diabetes using a needleless syringe use J-TIP for insulin injection. In other words, the sales volume of other needle-free syringes, including Medi-Ject, accounted for only about 30% of the international needleless syringe market. Although the U.S. medical insurance company included needle-free syringes including Medi-Ject in the scope of reimbursement for drugs (medical device products) as early as in 1995, the market sales of needleless syringes have not seen any improvement so far. Even with the current J-TIP sales situation, the CEOs are worried about the unclear market prospects of the products.

In summary, because of the limitations of its own technology, needle-free injectors can only be used to inject small doses of proteins and peptides (such as insulin or other bio-engineering drugs). It is impossible to inject anti-hypertensive drugs with great clinical needs. Pain medications, antibiotics, or anti-cancer drugs have greatly limited their use in hospital clinical practice.